I’m a huge fan of mysteries. “Top Ten Tuesday” is a list-making meme currently hosted by That Artsy Reader Girl, and the theme for this week is a FREEBIE. Since I’ve noticed a troubling lack of mystery-related lists for Top Ten Tuesday, I offer up my list of the top ten…specifically, the mysteries which most took me by surprise or had the most satisfying twists!

1– Have His Carcase, Dorothy Sayers 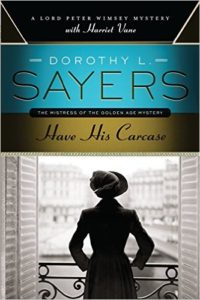 Mystery author Harriet Vane is on a walking tour along the coast of England when she discovers a body with its throat cut. Along with her suitor and friend, noble sleuth Lord Peter Wimsey, she sets out tracking down suspects, busting alibis, and cracking conspiracies.

The twist is truly original, beautifully foreshadowed, and is surprising yet inevitable – and thus very satisfying.

All in all, an excellent mystery story, with a smattering of romance mixed in. 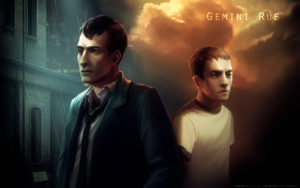 The hook for this sci-fi puzzle game is a former assassin hunting for his long-lost brother. But there’s way more in this story about organized crime, friendship, and whether we can really trust our memories.

Read my full review to see how the twist totally floored me and made me a fan for life! 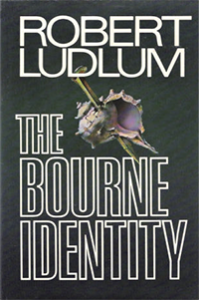 A man washes up in the Mediterranean Sea, riddled with bullets and more dead than alive. Several months of care on a tiny fishing island restore him to health, but not to himself – he can’t remember who he is.

Once he steps off the island, a world of danger and secrets rears up, threatening to swallow him unless his “gut-instincts” from who he was can keep him alive long enough to figure it out.

This amnesia mystery is not for everyone, but if you’ve got a strong stomach and conscience, it’s a fascinating onion of conspiracies and secrets!

This classic noir detective film stars the iconic Humphrey Bogart as Sam Spade – smooth-talking, quick-thinking, razor-sharp intelligent, and sly as a fox. When his partner is murdered, Sam sets out untangling a conspiracy of greed and murder, accompanied by a beautiful and mysterious woman wound in a cocoon of lies.

Lord Peter Wimsey’s brother-in-law to be is murdered in the dead of night. Lord Peter’s brother is arrested for the crime, and to clear him Wimsey must delve deep into his siblings’ darkest secrets.

Full of intelligence and British wit, this is a fantastically tangled tale that resolves with a dramatic twist that stuns the entire House of Lords!

A bizarre chain of events begins when sixteen unlikely people gather for the reading of Samuel W. Westing’s will. And though no one knows why the eccentric, game-loving millionaire has chosen a virtual stranger—and a possible murderer—to inherit his vast fortune, one thing’s for sure: Sam Westing may be dead…but that won’t stop him from playing one last game!

This is a suspenseful and intriguing mystery, with a satisfying ending. There are a lot of characters, but they’re colorful and individual enough to be easily distinguished from each other. 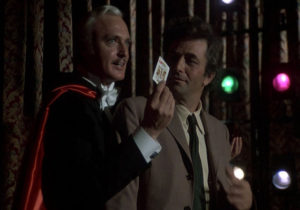 The main question of Columbo is not who committed the murder, but how our shabby, trenchcoat-wearing, cigar-chomping protagonist assembles the evidence to finally nail the culprit.

In this episode, Lt. Columbo faces down a magician. While the ending might be a little “goofy”, it’s adorable, satisfying, and totally condemning (of the bad guy, that is).

Fourteen passengers on a train. One is brutally murdered in the night. It has to be one of them…but who? The Russian princess? The Swedish maid? The American secretary?

Only Hercule Poirot could solve such a case. And trust me, it’s worth it to read the original classic!

This episode is one of my all time favorites. As the ending stretches on, Columbo seems to be doing nothing, while the murderer trundles along doing exactly what he wants. Then, in the last five minutes of the show – BLAM! Columbo unleashes his smarts, and the perp can do nothing but hang his head in defeat.

Another video game – but one well worth your time! Sissel awakes in a junkyard to discover that he’s dead…but not just dead, dead with powers. He remembers nothing about his life, and must use his abilities to unravel the mystery of his own murder before dawn!

Full of easy physics puzzles, bright humor, and unforgettable characters, if you venture into Ghost Trick you will make friends for life (and also explore a neat amnesia mystery)!

This book is good the way pizza and popcorn are good. Perhaps they don’t have many vitamins, but they’re great to chow down on once in a while.

The short stories in this volume each feature a little mystery, and can be finished in about one sitting each. If you like brain puzzles, clever clue-laying, and brilliant old ladies, you’ll suck this down like a peanut-butter chocolate shake – just as I did!

What are some of your favorite mysteries? What story twists have made you go, “Uhg! I should have seen that coming. This is awesome!”

(Did you see what I did? I went through a whole TTT post without mentioning the Master Chief!) 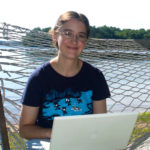 Kimia Wood grew up under an aspiring author, so spinning words and weaving plots is in her blood.

She currently lives with her family somewhere in the American midwest, bracing for the collapse of society by knitting, baking, writing, and reading as much Twitter as possible before the web goes dark.