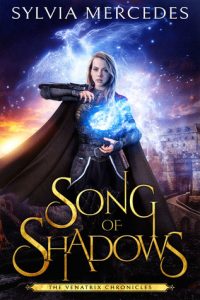 I would never have touched this book if Suzannah Rowntree hadn’t given it a rave review. After all, the description talks about “secret feelings” and “the passion threatening to ignite between them” (which always make me feel stabby).

BUT…I tried it out, and here are my thoughts:

The World: Dark, Cruel, and Brooding

We’re thrown into a dark world where malevolent “shades” seek to take over the bodies of humans, losing your soul to the abyss is easy (and frequent), and the dark forces of the enemy seem insurmountable.

The main group battling these invading spirits (and the humans who join with them) are called Venators and Venatrices, and they trap shades inside themselves to get magic powers – risking eternal damnation if the soul-separation (at their death) isn’t done properly.

All that is gripping enough, no?

Although, as our protagonist Hollis kept explaining all the rules to this system, I kept waiting for the rules to be broken somehow. Which is stupid, because Mrs. Mercedes invented this system, and she can do whatever she wants with it!

Maybe it’s because Hollis’ “Holy Order” has some Spanish-Inquisition vibes, what with their concern for the fate of souls over the comfort of the body…(which, y’know, if your soul can get banished to the Bad Place because of how you’re killed, it makes sense to pay attention to that). Not knowing Mrs. Mercedes’ “faith tradition” (as some delicately put it), I wasn’t sure if these were the undisputed “good guys,” or if I was waiting for a good-looking young rebel to challenge the status quo. (Spoiler: that doesn’t happen in this particular story.)

The whole “losing your literal soul forever because of others’ actions” is very Islamic, and feeds the overall gravity of the world.

There are evil counterparts to the Venators, who basically fuse their own souls with the other-worldly shades that they invite to share their bodies. This fusing gives them more magical power than the Venators (who are constantly in an internal battle to control their shades-on-a-leash), but it also means that when they die, their souls can’t be separated from the shade-soul…and they’re sucked into the abyss where banished shades are sent.

At first I thought this was a bit of a reach…until I remembered our own world:

And he told them a parable, saying, “The land of a rich man produced plentifully, and he thought to himself, ‘What shall I do, for I have nowhere to store my crops?’ And he said, ‘I will do this: I will tear down my barns and build larger ones, and there I will store all my grain and my goods. And I will say to my soul, “Soul, you have ample goods laid up for many years; relax, eat, drink, be merry.”’

“But God said to him, ‘Fool! This night your soul is required of you, and the things you have prepared, whose will they be?’

Human beings will do quite a lot for momentary gains, forgetting about the long-term consequences…

On this note, one other thing stood out to me. The Venators serve a Goddess. All well and good; this is a fantasy world, and goddesses have to known to happen in –

HA! Y’all stole that from Someone Else, you realize.

Did this bother me? Well, we didn’t really get into the theology of this place in much detail (except that being sent on to the “good place” after your death is dependent on your friends giving you a proper funeral…oh, and prophecies are a thing – although they don’t necessarily all come from the Goddess, since there’s a possessing shade that imparts them, and nothing we see indicates it is on good terms with Her).

Frankly, I was surprised at how much this got under my skin. People…I loved the Blackwell series…and that deals with ghosts hanging around the literal New York City (as in, our own world, not some fantasy world that has a total right to have its own rules).

Bottom line, I can’t even explain why this element felt off to me…but don’t go handing this book to your kid as a fun, harmless read without being prepared to read it alongside them for theological discussions.

We meet our main character Hollis as a four-year-old, just learning about her home, the shades trying to invade it, and the Venators/trices fighting to protect it (and her).

Through her eyes, we experience the helpless terror of the basically demon-possessed invaders – and the allure of the mysterious, brooding warriors who can fight back.

After losing her family, Hollis becomes a trainee for the Holy Order, and becomes a Venatrix with her own power-granting shade…but she also has a serious crush on her coworker, which is forbidden because babies born of shade-possessed are all kinds of cursed.

Well, so that’s the set-up. And it’s handled pretty well, with minimal angst, and usually more focus given to staying alive than “Does he love me back?”

The thing that doesn’t work for me is that some of the characters act in contradictory ways.

1) At the opening of the book, Hollis’ mom calls the Venators/trices “demon-possessed” and “abominations” because they welcome shades into their bodies to get the power to fight shade-taken.

A chapter later (after losing her husband and son), she dumps her daughter at the abbey of the Venators to be turned into one of their warriors…basically damning her own daughter’s soul in her eyes.

Maybe the pain of losing her husband motivated her to commit her daughter to kill the evil leader, and maybe the four-year-old POV didn’t let us properly experience that…but it wasn’t properly developed in my opinion.

2) Hollis knows that her romantic attraction for her coworker Fendrel is forbidden, could get them both in all kinds of trouble, and could have actual serious consequences even beyond the disapproval of their superiors.

Because she’s smart enough to know all that, she fights her affection (yes, that’s something you can actually do!) and focuses on her job…until plot stuff makes these two teenagers alone in the wilderness together (under lots of stress, including the fear of death, madness, and damnation) have a steamy kiss (I’m pretty sure that was all, although I couldn’t bring myself to fully read those paragraphs).

Fast forward to the close of the story, and Fendrel has chosen 1) his duty to their Order, and 2) his duty to bring down the literal Evil Goddess, over his romantic attraction to Hollis.

Remember: that’s what she was doing the entire first half of the story…choosing her duty to her job and the literal fate of the world (and the eternal fate of their souls, as well) over heart-flutters for a hot dude.

Yet when he makes the same choice, she turns all passive-aggressive and doesn’t even want to still be his friend…because to respect his level-headedness, his devotion to the needs of others, and his sacrifice of his own desires for the greater good would be too adult.

The Story: Entertaining and Punishing

The world feels real and gritty…the magic-system is understandable, yet still holds some surprises…the characters were three-dimensional, yet not paragons…the writing style was enjoyable. The action was easy to follow, and added tension in the right amounts – mixing elements of the physical world (poison, projectiles, etc.) with the spiritual realm (including battles within character’s minds). The plot had a clear and satisfying arc, yet was also just as clearly setting up for the series to follow it (namely “The Venatrix Chronicles”).

It was a good book, with a firm grasp on what it wanted to be, and it speared that goal squarely.

I just wasn’t the target it was aiming for. And I don’t feel like hanging out with these characters for the next installment.

But hey…it’s FREE from the author’s newsletter!

Song of Shadows is available for FREE by signing up for the author’s newsletter.

I was not required to write a review of any kind, and all opinions expressed are my own.