On a sand-swept wasteland, Horatio Nullbuilt, version 5, and his floating companion Crispin Horatiobuilt, v. 1, live in their broken rocket-ship of a home – until the day a big robot with laser-shooting claws steals their power core, leaving them with days or weeks to find a replacement before they and their home are left helpless and drained.

It’s MacGyver in the post-robot revolution-apocalypse, or Pajama Sam‘s more intellectual older brother, and a slow start didn’t prevent this point-and-click puzzle game from having a profound, slam-bang ending.

Plus, I and my “gameplay associate” completed it without consulting a walkthrough (ahem – personal achievement right there)!

Starting out, Horatio didn’t have the same magnetic personality as did Azriel Odin in Gemini Rue (also by Wadjet Eye Games – and one of the best point-and-click adventures I’ve ever played). Perhaps it was that he had a sidekick to interact with – whereas Azriel had to make his comments to himself – that made him come across more snarky and short-tempered. His goal was also less visceral, although his plight was made clear as the story progressed: no power core, no power – no home, no energy for him and Crispin to even move around.

The puzzles also felt less organic than in Gemini Rue. The first several puzzles were largely inventory-based – which of course requires wandering around the landscape and finding the proper pieces. Just a bit of pixel-hunting there…

The graphics are a little rustic, but they have an appealing hand-crafted feel, especially in the cut-scenes. As with many puzzle games, items and people you can interact with have their names displayed when you hover over them. Clicking and right-clicking on objects also provokes Horatio to say different things, either commenting on their story- and world-significance, or simply to tell you, “There’s nothing left to salvage there.”

The inventory system for Primordia was more invasive than for Gemini Rue or Beneath a Steel Sky, but this makes sense to a certain degree as you need to cobble together various items to create different tech devices. This is a nice steam-punky touch.

The sentient robots in Primordia also have a fine touch of realism – their personalities are contained on circuit boards, they use processors to think, and they talk about the importance of Memory and Logic.

is the funniest character: as the self-deprecating comic relief and the hint system, he will offer up suggestions and leading comments to help direct you to the solution. And, if you dig for hints too often, he’ll subtly insult you for needing the help of a floating robot without arms.

The rest of the humor is clean and cheery, such as when you plug coordinates into your ship-board telescope…Horatio says, “There’s nothing here – it’s black!” and Crispin retorts, “That’s because the telescope’s pointing down at the deck!” 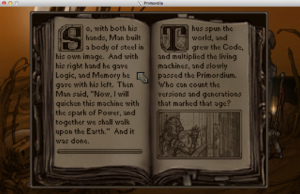 Horatio – and a few other robots – revere “Man” as the all-builder. Crispin, on the other hand, is a sceptic. I was leery myself when this theme was first introduced, unsure how they would handle the idea of religion. I don’t want to spoil the ending for anyone, but the game’s overall stance seems to maintain realism (with humanity not actually a divine being) without totally demystifying existence (and there’s also some pretty delicious jabs at evolutionary progressivism).

As Horatio and Crispin explore the world, travel to the bright yet forbidding Metropol (“city of glass and light”), and uncover their backstory, the emotional resonance of the story and characters deepens. The puzzles are challenging, and make you feel clever for figuring them out.

There are also multiple solutions to several of the puzzles, which leads to multiple endings. I feel that my brother and I found the best (most satisfying) solution and ending, but there’s definitely room for trying it a different way on another play-through!

The characters you meet are colorful and interesting, Horatio’s character develops into someone awesome, Crispin is adorably abusive and peppy (and ultimately heroic), and the thematic conclusion is profound and poignant. While the route to get there is a little rocky at times, I think Primordia ultimately has some things worth saying.

Primordia was developed by Wormwood Studios and published in 2012 by Wadjet Eye Games, and is available on GoG.com for Windows, Mac, and Linux. If you wish-list it on GoG, they’ll email you when it goes on sale! Product includes the extensive and beautiful soundtrack, artwork, and a novella (which I haven’t read).

The game is also available on Steam, but only for Windows; also note that Steam DRMs their software.

Technical Note: the default settings made the graphics mis-proportioned on my Mac’s screen. What worked for us is this: in the launch window, select [Run in a window instead of fullscreen], then apply the [3x nearest neighbor] graphics filter. Also click the [Advanced] button to make sure the game is allowed enough RAM to run, if you encounter further problems: 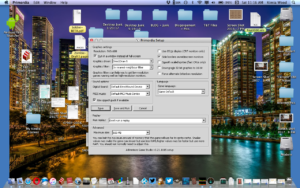 Cover image at the top is courtesy of Wikipedia.com. Screenshots of gameplay were taken by me and are used for review purposes.

One thought on ““Primordia””